The overwhelming weight of research demonstrates a positive effect from school choice programs. This slide provides a summary of much of the research while the links below provide access to some of the actual studies. 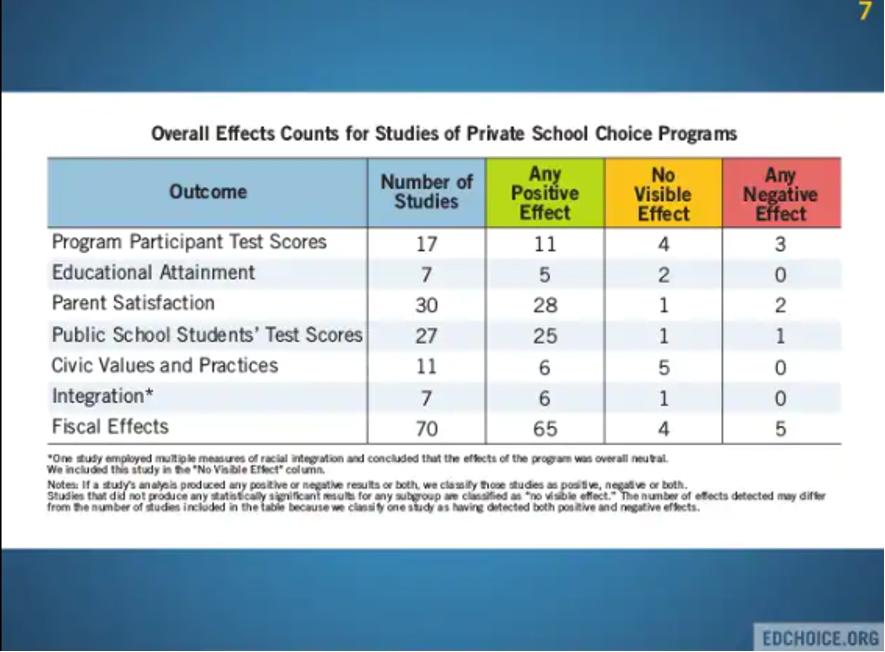 Higher levels of educational freedom through school choice programs are significantly associated with higher achievement levels and higher achievement gains in all statistical models.  This positive association is two to three times larger than the average effect that comes from school intervention on achievement test scores.

School choice programs result in higher parent satisfaction rates. Since parents are best equipped to know and understanding their child’s individual needs, empowering them to make school decisions for their child results in a better educational and environment fit for those needs. As a result, satisfaction rates improve with school choice.

Students accessing school choice demonstrate a better grasp of civic virtues – those areas typical thought of as being the domain of public schools. But choice students demonstrate higher levels of political tolerance, civic skills, future political participation, and volunteering when compared to public schools students. These results appear to be caused, at least in part, by choosing to attend faith-based schools.

Critics often argue that school choice programs will gut public schools and harm those students who remain in those schools. In fact, the data shows the opposite to be true. Students who choose to remain in their public schools demonstrate increased academic gains when school choice is introduced to their market. Whether it is because the student who attend that school are now all committed to that school being the best fit for them, or because market forces of competition have brought innovation and improvement, the fact remains that public school students benefit from the presence of school choice. This is particularly true for lower-income students, but is generally true for all students.

A fuller bibliography of school choice research may be found here:

Finally, recent national polling on attitudes toward programs like Backpack Bill in which state funding follows students to the school of their choice show dramatic and overwhelming support from parents. A significant majority of both parties and of the four largest ethnic/racial populations now support policies like Backpack Bill.